The Church of Ayios Charalambos 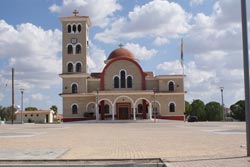 The church of Ayios Charalambos was built a few years ago… It's a church of modern architecture. The increase of the population, due to the settling of the refugees, has made the construction of another church more than necessary. For the construction of the church, the parish of Ayios Charalambos was formed on 2nd February 1986 after a meeting of the residents with the Bishop of Salamina Mr. Varnava. There were many views regarding the name of the Saint to whom the church would be dedicated. Finally, the name of Ayios Charalambos was chosen, based on the fact that there was no other church dedicated to the Saint in the archiepiscopal region, apart from a chapel in the Athalassa mental hospital. 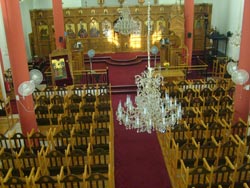 Following the decision for the construction of a church dedicated to Ayios Chararalambos, a small, plain, wooden church was built up which operated for the first time on 2nd February  1986. The residents of the settlings went to this small and plain church for almost a decade. As the years went by, the construction of a bigger, concrete-made church was necessary because the wooden church was damaged and the population of the settlings had increased significantly. It was then that the decision, for the construction of a church next to the wooden one, was made. The church of Ayios Charalambos was built as a result of the efforts made by the residents of the municipality of Yeri. On 25th March 1997, the vespers service for the Annunciation took place for the first time in the newly built church. Lacks of equipment did exist but they were gradually covered thanks to peoples' contribution. Hence, the inauguration ceremony of the new Church took place on 29th May 2000 by the Bishop of Salamina, Varnava.

Copyright © 2020 - Municipality of Yeri - All rights reserved.
Powered by Technomart